Released in 1997, Amistad was a film directed by Steven Spielberg that brought the mutiny of the Amistad, and the legal battle that ensued after, to life. The script was written by David Franzoni and the film stars many well-known actors such as Morgan Freeman, Nigel Hawthorne, Djimon Hounsou, and Matthew McConaughey. The film shows us the horrors of the slave trade and the terrible truth of what slaves were forced to endure during the era of the Middle Passage. The film’s most dramatic and emotional scenes come from the tragedies faced on the Amistad. After the Mende captives lead a successful mutiny aboard the Amistad, the captives spare a Spaniard so he can help them navigate back to Africa. Instead of obeying the orders of his captors, the Spaniard takes them to the coast of the United States where the ship is seized by the United States Navy. The climax of the film falls within the acts of the legal battle fought for the freedom of the Mende captives, when Djimon Hounsou’s character stands in the middle of the proceedings and chants, “Give me free”. In the final acts of the film, the presiding judge declares that the Mende slaves are free human beings and should be allowed to return home to Africa. In reality, this was a very controversial decision by the Federal Court that created tension between abolitionists and slave owners because of the language used by the court to justify its verdict. The film offers a brutal, yet realistic, depiction of the treatment of Africans during the slave-trading era.

The mutiny of the La Amistad occurred in July of 1839; this was when the Mende captives overpowered the crew, killed the captain and two seamen (Hill 124). The Africans spared the lives of two crewmen in order to navigate back home to Africa. However, unknown to the Africans, the crewmen led them to the coast of the United States, where the crew of the U.S. Brig Washington seized the ship and everyone aboard it (Hill 124). The legal battle would then begin in order to decide whether the Mende captives were subjects of Spain, therefore their property or whether they were kidnapped and should go free on the basis of self-defense (Jones 48). The abolitionist were arguing that the Africans were protected under the universal rights of self-defense since they were illegally kidnapped and not slaves. If the district attorney were able to prove that the Africans were actually slaves, they would have been considered property and turned over to Spain. The legal battle was far from domestic, it was an international problem that involved Spain, Britain, and Cuba (Jones 64). It was believed by abolitionists that the executive branch, more specifically President Van Buren, would interfere with the court’s decision to ensure his chances for reelection would not be affected (Jones 136). It is a fact that his and the executive branch’s influenced delayed the courts decisions for months. This disillusionment towards federal government was common during the slave era and long after. It was on March 6, 1841 that the Supreme Court ruled that the Mende captives were free and that “it was the ultimate right of all human beings in extreme cases to resist oppression, and to apply force against ruinous injustice” (Hill 125). As I stated earlier, the verdict was extremely controversial to slave owners and abolitionists alike because of the rooted practice of slavery during the time of the ruling. Slave owners saw this as an attack on the tradition of slavery in the South because the court ruled that blacks had the right to “resist oppression” and “apply force against ruinous injustice” (Hill 125). On the other hand, Abolitionist were pleased, yet disappointed in the hypocrisy of the court’s ruling. However, the Supreme Court, the highest court in the United States, had delivered a verdict that gave the rights of legal self-defense to blacks, which were usually reserved for whites. African Americans are still battling for equality in the court and under the law and they are still being abused by law enforcement. The influence of the government regarding blacks in the legal system played an enormous role in the actual case and in the film. The film may have been released more than a decade ago but the problems it attempts to make aware can still be seen in our society today.

Director Steven Spielberg, chose to be as historically accurate as possible in order to present a true image of the history of slavery to the American people. The film showcases all the horrors faced by slaves during the slave trading era. There are many scenes, like bloody slaves being whipped non-stop, that make the audience feel terrible for what slaves had to go through. There was a scene where Cinque, the main protagonist, gets captured behind his unknowing family and is dragged away while only seeing his son’s and wife’s backs. The shocking thing about this scene is that he was captured by other Africans looking to make a profit on the slave trade. It is very disturbing that this is historically accurate, Africans would capture men and women from enemy tribes in order to sell them. The film is filled with the brutal truth of slavery and how inhumane the entire system was. It was clear that historical accuracy was an important point that Steven Spielberg wanted to focus on during the filming of Amistad.

Fig. 1. Depiction of how the Mende captives were packed into La Amistad in preperation for the voyage across the Middle Passage et al; Amistad, 16 Nov. 2017, www.blackeducator.org/Amistad-Cinque-chains.jpg

The main theme of the film is the idea of human solidarity, the idea that we are all the same no matter race, religion, or color. Most of the film is spent trying to prove that we are all human, in and out of the film’s plot. Spielberg does this by using the rhetorical appeal, pathos. We are forced to watch horrific scenes of how badly slaves were treated. The audience witnesses ruthless whippings, suicides to avoid enslavement, and the treatment of slaves like cattle. The scenes depicting the middle passage may be the most dramatic and memorable moments in any slave film in the modern film era. These type of scenes make the audience side with the Mende captives and make them want to see the Mende captives set free before the film’s end. The audience naturally puts themselves in the position of the slaves; “What if I were on that ship?” The emotions one feels when they witness these brutal scenes are unbearable, the scenes make the audience want to look away, but at the same time they can’t. As Elizabeth Alexander says about the Rodney King beating, “Again, the violence that is watched, this time on the television, is experienced, as it were, in the bodies of the spectators who feel themselves implicated in Rodney King’s fate.” When the public watches something tragic, it is almost natural to imagine themselves in the same position in order to find empathy for the victim. Djimon Hounsou portrayal of Cinque serves as Spielberg’s way to channel pathos and sympathy to the audience. When all of the audience begins to share the emotions they witness on screen, people begin to realize that these tragedies affects everyone because we are one the same. 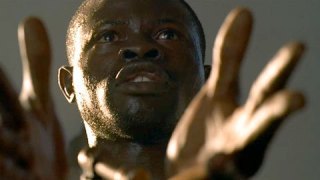 There is a very dramatic scene in the courtroom when Cinque stands up and chants the words, “Give me free” (Spielberg)! The emotion put into the chant as the judge orders him to refrain from speaking and remain quiet is inspiring. The energy and will heard in the chant can be seen as a representation of the struggles African Americans have faced throughout the years after slavery. This also refers back to the idea of human solidarity, one doesn’t have to be white or know a specific language to have basic human rights. Spielberg specifically captures the surprised reactions of the viewers in the courtroom, none of them expected a Mende captive to have the courage and intelligence to chant for his freedom. It is also very reminiscent of the way African Americans may feel in the courtroom. With everything against them in the legal system, they may feel the urge to yell aloud like Cinque but they know they cannot. While speaking to John Quincy Adams before the trial, Cinque tells him, “I meant my ancestors. I will call into the past, far back to the beginning of time, and beg them to come and help me at the judgment. I will reach back and draw them into me. And they must come, for at this moment, I am the whole reason they have existed at all” (Spielberg). Cinque has faith and believes in the power of his ancestors, he understand what the amount of hardships they have gone through for him to be on Earth. The themes of memory and violence have some representation in these words. Many African Americans today look back to their ancestors and past to gain the courage to fight the oppression they endure in the present.

There have been many reviewers and essays written about Amistad, most of them relating to the films effect on the audience and the reactions of the audience. In Chester Fontenot’s review of the film, he says, “While a number of African Americans told me having seen Amistad that they felt as if Cinque’s story was their own personal narrative, an equal number of whites indicated that this narrative brought too close for comfort the cultural sins of their ancestors” (Fontenot 238). It is undeniable that the film had incited a large amount of emotions in the audience that viewed it. The film had affected everyone, not just African Americans, but whites as well. This is a common trait that most thinkers have in their analysis of the film, they all discuss how impactful the film was on American life. The films brutal depictions of the treatment towards the captives brings certain race issues, regarding the treatment of African Americans, into the light. In Steven Mintz’ article, he explains why films have this impact by saying, “Without any doubt, films can provide viewers with a sense of the look and atmosphere of the past in a way no lecture can convey” (Mintz 317). When the audience is presented with images of these horrors, it is more relatable and effective than just listening someone lecture about it. With a film, the audience is able to witness the emotions and tragedy of the slave trade and how Africans were treated in the past. As Howard Jones stated in his article, “Spielberg’s efforts have already promoted a dialogue over race that demonstrates again that the struggle for equality is not over” (Jones 380). It is clear that all of these scholars believe in the films ability to effect the audience and change public opinion on a topic. As Jones said, the film has the ability to spark conversations on the topic of the struggle for equality, which has to occur for any change to happen. Also, Alexander states, “African Americans have always existed in a countercitizen relationship to the law; how else to contend with knowing oneself as a whole human being when the Constitution defined one as three-fifths?” Since the dawn of the United States, African Americans have been seen as lesser or second-class citizens and films like Amistad have the ability to bring attention to these problems. Amistad is a brutally realistic film that had an enormous impact on its audience, it brought the problems of equality to light and it sparked many conversations on the topic with attempts to bring change in America.

Jones, Howard. Mutiny on the Amistad: The Saga of a Slave Revolt and Its Impact on American Abolition, Law, and Diplomacy. vol. Rev. ed., Oxford University Press, 1998. search.ebscohost.com/login.aspx?direct=true&db=nlebk&AN=330561&site=ehost-live.