Nasir Bin Olu Dara Jones (Nas) was born on September 14, 1973 in Crown Heights, Brooklyn, New York City, New York. Growing up in the ghetto, he experienced many troubling times and in order to deal with them, he turned to hip hop. On April 19, 1994, Nas emerged from the underground scene and released his first studio album, Illmatic. Illmatic was an instant success in the world of music critics and was praised for its poetic lyricism. Now, it is considered to be a quintessential part of hip hop music history and shaped future generations of rappers. It is often cited as one of the greatest hip hop albums of all time due to its realistic portrayal of the woes of life in the ghetto, such as high rates of mortality and mass incarceration. The gripping realism of pain and suffering that it outlines is unmatched, while still being hauntingly beautiful. Touré, a musical journalist for Rolling Stone, perfectly sums up the encompassing nature of the album,“Nas expressed the futility of his life, it’s all like a rose stretching up between cracks in the sidewalk, calling attention to its beauty, calling attention to the lack of it everywhere else.” The album is a glaring look at the pain and suffering of many African Americans in the inner city.

Nas released his album in 1994 when he was living in ghettos of Queens. The ghettos have long been an aspect of American history and were first created as a means to geographically isolate African Americans in the early half of the 20th century. In the 1930’s the government created housing programs under the New Deal to create housing for citizens. However, “the government’s efforts were primarily designed to provide housing to white, middle-class, lower-middle-class families… [with] African-Americans and other people of color left out of the new suburban communities.” The African Americans and other people of color were “pushed instead into urban housing projects” (Gross). These oppressive acts continued geographic segregation until the Fair Housing Act of 1968. But by this time, the results of being forced to live in areas experiencing decline in economic well being as a result of declining numbers of manufacturing jobs already created a cycle that many African Americans would not be able to escape from; In order to move out of the ghetto they need to be wealthier and to be wealthier they need to move out of the ghetto. As a result, ghettos continued to be inescapable places without the economic resources, opportunities, and quality of life shared by other communities. By the 90’s, the New York ghettos had become overrun by the crack epidemic and street crime, poverty, violence, and drug use abounded.
One way for the inhabitants of these marginalized communities to express their ideas and concerns about their living conditions was through artistic expression. Hip hop rose in popularity in the 1980’s and produced many famous and influential artists who used the music as a medium to denounce and bring attention to their living conditions and the lack of opportunities and resources available to minorities. One of the first influential hip hop artists to rise to prominence was Afrika Bambaataa. Bambaataa was a former gang member and used music to spread positivity and address social issues. His use of music as social commentary helped to establish a precedent for hip hop that continues to this day. Another hip hop artist that rose to prominence in the 80’s was a New York native named Rakim. Rakim and a few other early hip hop artists including Public Enemy and A Tribe Called Quest would become a large influence for many of Nas’s future works because of their style and the topics they rapped about.

Nas’s album primarily focuses on life in the ghetto. Nas specifically draws heavily upon his own life experiences to create meaningful and emotional songs. Overall, the album discusses themes related to the bleakness of life, gang violence, and the damaging effects of urban poverty.
Throughout his album, Nas main appeal is ethos and he is able to establish that in the album through the personal experiences he shares. Only a person who has the first hand experience of living as an oppressed African American man in the American ghetto will be able to share the message as effectively as Nas does. Two specific events that Nas dwells on in his album are the night his friend and brother got shot hours apart and the times he spent writing to his friend that was sent to prison. In the song “One Love,” Nas narrates a hypothetical letter to a friend that has been incarcerated: “So stay civilized, time flies/ though incarcerated your mind dies/ I hate when your mom cries/ It kinda makes me want to murder.” Because Nas is rapping a hypothetical and intimate letter to a friend, he is able to express his raw emotions effectively which in turn helps the audience empathize with Nas and his experiences.
Any person can read about the ghetto in the news, so the real power in this album is allowing the audience to actually listen and connect with someone who is being vulnerable and sharing the minute details about life in the ghetto. And through these details, the audience is able to gain a comprehensive idea of what it is like to live in the ghetto. Because Nas’s medium of delivery is music, he is able to use the written, oral, and nonverbal forms of communication to express his ideas. The written lyrics and the nature of the medium Nas uses provides Nas a way to tell captivating stories that describes the details of his life in a short few minute format. And, the oral delivery allows him the ability to express his written lyrics with the emotion and tone that he wrote the lyrics with which allows the audience to better connect the message he is conveying.

The nonverbal rhyme schemes and pace of the song help him emphasize certain points and the song. In “Life’s a Bitch,” Nas starts off with saying “Life’s a bitch,” with an increase in energy and pace but then follows up dejectedly and abruptly by saying “then you die.” This build up of suspense and then prompt deflation of energy and message uses nonverbal communication to deliver the meaning more effectively than is it was just read through without an change in pace. The ability to use all these forms of communication allows Nas to create an intimate experience that makes it seem like the audience itself is experiencing Nas’s life. Through his songs, Nas is able to describe and express the life of an African American living over a hundred year after slavery has ended. Through his description of his life in the ghetto, it is clear that while slavery does not exist anymore, oppression, inequality, lack of resources, and a low quality of life are all tangible and continuing after effects that African Americans continue to face. This message is still relevant to listeners even now because his description of life in the inner city still holds true for many places around the country.

Due to the cultural importance of Illmatic there have been many conversations about it over the years. Sentiments similar to this are also expressed in James Guida’s article “The Eternal ‘Illmatic.’” Guida argues that even in the wake of the album’s 20th anniversary, it still is as culturally relevant and emblematic of the issues that plague African Americans in the inner cities to this day. In Tara Betts’ journal “Life Is Good: How Hip-Hop Channels Duende,” she comments on how her own upbringing mirrored parts of Nas’s album and how unlikely it was for her and her brother to have survived past high school age. Her piece adds an even greater power to Illmatic because it emphasizes that Nas’ experiences were not isolated. 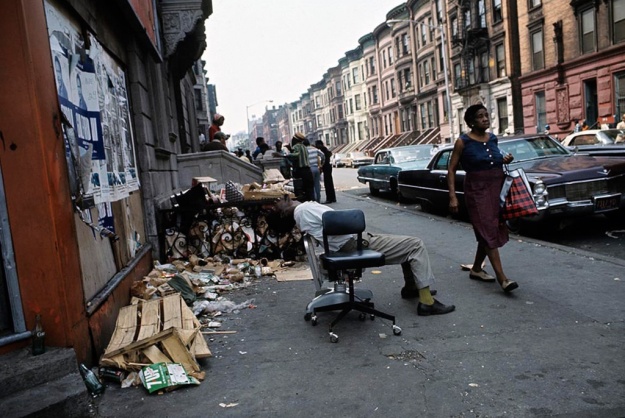 The world of the inner city ghettos was bleak and dismal. Pulling from his own experiences in the ghettos of New York, Nas crafted an emotionally charged album that resonated with many people who had survived, or were still trying to survive, life in the ghettos. “Surviving” being the optimal word because throughout the work Nas paints the ghetto to be a place where one has to fight to live, going as far as to say “I ran like a cheetah, with thoughts of an assassin” (N.Y. State of Mind) when describing an altercation and having to get his gun to save himself. Sentiments similar to this are also expressed in James Guida’s article “The Eternal ‘Illmatic.’” There is a power in the lyrics and melody of the album. Part of this power comes from the unconventional means that the album employs. Nas broke away from many traditional aspects of hip hop in order to tell his story better, as stated in the journal “‘Time is Illmatic’: A Critical Retrospective on Nas’s Groundbreaking Debut.”
The purpose of Illmatic has been analyzed in many different ways, but in his article for Time, Christopher Farley states that “[Nas] doesn’t mean to glorify the rough world he comes from, merely to render it.” Illmatic was meant to expose the world of the ghettos, not praise the violence and lawlessness. The only way to make an issue better is to bring attention to it, and Nas did that though music. The true power of music is that its message can be experienced and understood by all people in a way that articles and research can not. It allows people to experience moments in other people’s lives. The album Illmatic is especially unique in this way. One really gets a sense of what Nas and others like him live through on a daily basis. There are many ways in which Illmatic has been analyzed, but they all nearly come back to the power that Nas is able to convey in regards to the desolation and despair of the ghettos.